From "PTTLink Wiki"
Jump to navigation Jump to search

When a user with an existing node number selects to expand the number, they go to the portal and select to add a node, rather than request a new node. The portal converts node xxxx to xxxx0 and adds node xxxx1 to the user’s node list. An additional eight NNX nodes may be added for a total of 10 sequential (xxxx0 thru xxxx9) node numbers. The reason xxxx has to be changed to xxxx0 is because AllStar would connect to node xxxx when attempting to dial node xxxx1.

Once the node user has reconfigured their node computer, both node numbers register, show on the AllStar nodes list, show on stats page, appear in Allmon2 and of course can connect or be connected to.

New users that have not yet been issued a node number would request, rather than add a new node number via the portal. This process has not changed and is documented on the Beginners Guide.

Use of NNX node numbers is totally optional. The prior node request process still exists. Existing and new users may continue to request new node numbers per current policy.

Users who opt to expand an existing node number will need to make configuration changes to their node. That is (using the example numbers above) all references to node xxxx will need to change to xxxx0. These files include rpt.conf, extensions.conf, iax.conf and allmon.inc.php (if using Allmon2 or Subermon). Reconfiguring all occurrences of the existing node number is critical. Such an oversight may confuse users and put an extra support load on system admins, at least initially. The menus that are built into newer AllStar installs simplify this task greatly.

Adding NNX nodes xxxx1 thru xxxx9 is the same change that would be made when adding any additional node.

NNX on the AllStar Portal

Requesting a new node has not changed substantially since implementation of NNX. It's basically the same process described in our Beginners Guide. To begin requesting a new node number from the admin team, select the Portal menu, then Node Settings, then "THIS LINK" as shown below.

1) The "Request" option will be selected. 2) Then choose the server you want the node assigned to. You can change that later. 3) Type an optional message and press Submit 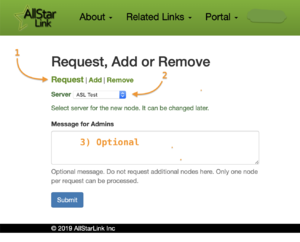 You will then see a pending node request in your nodes list. 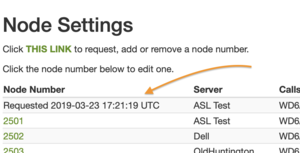 Adding a new node converts an existing node to an NNX node or if the node is already an NNX, adds another NNX node as described above.

To begin adding a new node number, select the Portal menu, then Node Settings, then "THIS LINK" as shown below.

Next click green Add (1) and the form change and will look similar to the one below. The dropdown (2) shows all your nodes including NNX nodes. 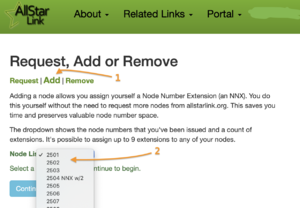 Select the node you wish, click Continue and on the next screen confirm the action. Below shows node 2501 has been changed to 25010 and 25011.

Select Remove to convert an NNX node back to a non-NNX type node.

Removing a non-NNX node returns the node to the pool of free nodes for reassignment. See our reassignment policy.

To begin adding a new node number, select the Portal menu, then Node Settings, then "THIS LINK" as shown below.

Next click green Remove (1) and the form change and will look similar to the one below. The dropdown (2) shows all your nodes including NNX nodes. 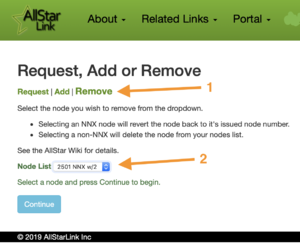 Select the node you wish, click Continue and on the next screen confirm the action. Below shows node 25010 and 25011 have been changed back to 2501. 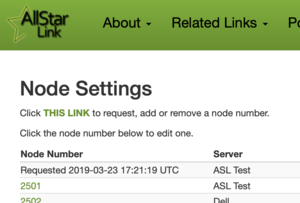 NNX on your AllStar Node

and then change the nodes stanza

The change in extensions.conf can vary depending on the vintage/distro of your node. But typically you modify this one line:

If the radio-secure stanza looks more like this, then change it.

In this example nnnnn is used to indicate your original node number. Just add a zero as above.

That's it! Now restart your node for the changes to take effect. Make sure your new node number is registered and can connect.

If you want to add another node to the same server server, the process is exactly the same as Two_Nodes_on_One_Server.

If you want to add an NNX node to a new server, the process is no different than building a new server, or exactly the same as PDF explaining how to have two servers behind a NAT router.